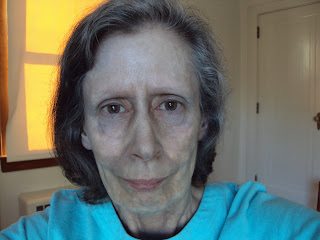 What Vermont Naturopaths Apparently Didn’t Know Until I Told Them -
Silver Can Make You Look Like Me Or Paul Karason, The Blue Man Of Oprah Fame. We have argyria. I’m gray. Paul is blue.

What the naturopaths did not know is that silver, the natural element they think is a drug, is a heavy metal toxin which should never be taken internally or put in your eye. It can disfigure you by permanently discoloring your skin (argyria) and eyes (argyrosis). Silver has no known function in the body and does not prevent or cure any illness. It is snake oil! Doctors who learn scientific medicine in school rather than an archaic, pre-scientific, belief-based system like naturopathy have known this for over fifty years. If naturopaths had any knowledge of pharmacology or toxicology, they would have known it too.

This isn’t about one or two ignorant naturopaths, one or two bad apples. It is about a whole barrel full. How do I know that? Because naturopaths included silver in their Vermont Naturopathic Formulary, the list of drugs that they are permitted to use!
http://rosemary-jacobs.blogspot.com/2010/08/naturopaths-silver_6314.html

When I pointed out their mistake, they brushed me off! What does that tell you about their concern for patients?

Posted by Rosemary Jacobs at 1:16 PM